61
Shares
Facebook24Twitter15WhatsApp3Telegram1
Linkedin1Pinterest5Tumblr1
Agitators also took a pledge to intensify their struggle to get the recognition of 'Sarna dharma code'.New Delhi: A large number of people from various tribal communities of five states, including Jharkhand, Odisha and Assam, staged a demonstration here on Thursday, demanding that the Centre recognise their religion as 'Sarna' and ensure their enumeration under… 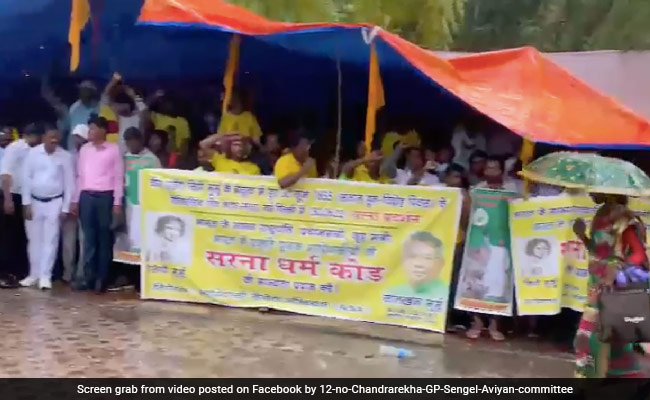 Agitators also took a pledge to intensify their struggle to get the recognition of ‘Sarna dharma code’.

A large number of people from various tribal communities of five states, including Jharkhand, Odisha and Assam, staged a demonstration here on Thursday, demanding that the Centre recognise their religion as ‘Sarna’ and ensure their enumeration under this category during the upcoming census.

The agitators also took a pledge to intensify their struggle in order to get the government recognition to the ‘Sarna dharma code’ and held a mass prayer at Jantar Mantar, seeking blessings of their deities and revered leaders.

The agitation was organised to mark the anniversary of the beginning of the Santhal Rebellion against the British on June 30, 1855.

The members, majority of whom belonged to the Santhal tribe, raised their demands under the aegis of the Adivasi Sengel Abhiyan (tribal empowerment campaign) from as many as 250 scheduled tribes-dominated blocks from 50 districts of Jharkhand, Bihar, Odisha, West Bengal and Assam.

“We are here to demand that the government recognises our religion as ‘Sarna’ and include a provision in the upcoming census for enumeration of Adivasis under this category,” Salkhan Murmu, a prominent tribal leader from Jharkhand, who is spearheading the movement, told PTI.

“We wanted to call on President Ram Nath Kovind to convey our feelings and urge him to recognise our religion as Sarna, but could not get an appointment with him. So, we submitted a memorandum of our demands to the President through the police,” he added.

Mr Murmu, who was a BJP MP from Odisha’s Mayurbhanj Lok Sabha constituency for two consecutive terms from 1998-2004, said tribals in the country have their own religion, religious practices and customs, but it has not yet been recognised by the government.

“We Adivasis are neither Hindus nor Christians. We have our own way of life, religious practices, customs, culture and religious thoughts, different from any other religion. We worship nature and not idols. There is neither Varna system in our society or any sort of inequality,” he said.

In absence of the government’s recognition to the tribals’ religion, the members of the Scheduled Tribe communities in the country are misled to embrace other faiths, he claimed.

“India is home to over 12 crore tribal people. They have been recognised as Scheduled Tribes but unfortunately their religion has not been recognised even as it is fundamental under the Constitution,” he said.

“Since all the tribal people worship nature and their religious thoughts, practice, culture and customs are way different from any other religion, we demand that our religion be recognised as Sarna,” Mr Murmu said.

Sarna can be accepted as a common name for the religion of all ‘adivasis’ in the country as it means place of worship in Santhali language, he pointed out.

As many as 1,000 people had arrived from the five states in trains, but not all could join the protest as police denied them permission citing some court order and restrictions imposed due to Covid-19, he said.