Chinese officials lashed out at Sen. Ed Markey, D-Mass., for leading an unannounced delegation of lawmakers to Taiwan.

The comments come after a group of five U.S. lawmakers landed in Taiwan Sunday, less than two weeks after House Speaker Nancy Pelosi became the highest-level U.S. official to visit the country in over 20 years.

PELOSI DEFIES CHINA DURING MEETING WITH TAIWANESE PRESIDENT TSAI ING-WEN: ‘WE WILL NOT ABANDON OUR COMMITMENT’ 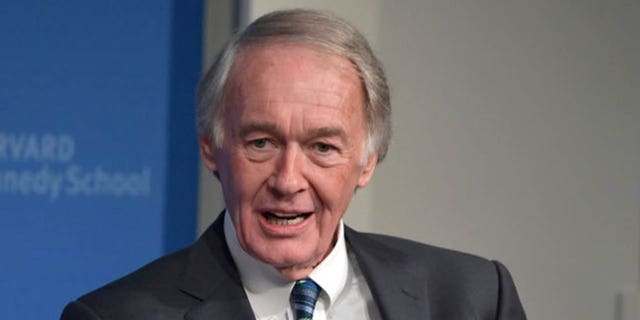 Pelosi’s trip was quickly condemned by the Chinese, who launched a series of military drills and exercises in the Taiwan Strait in response.

The group of lawmakers, which includes Democratic Reps. John Garamendi of California, Alan Lowenthal of California, and Don Beyer of Virginia, and Republican Rep. Amata Radewagen of American Samoa, met with Taiwanese officials Sunday, who enthusiastically welcomed the American visitors.

But the visit set off a new round of heated rhetoric from Chinese officials, who claim that the self-governed island is part of Chinese territory. The U.S. has agreed not to hold formal diplomatic relations with Taiwan, but it has long provided support to the island, aimed at helping it defend itself from China.

In this photo provided by China’s Xinhua News Agency, a People’s Liberation Army member looks through binoculars during military exercises as Taiwan’s frigate Lan Yang is seen at the rear. (Lin Jian/Xinhua via AP)

“China firmly opposes any kind of official ties between the US & Taiwan region,” Chinese Ambassador to the Association of Southeast Asian Nations Deng Xijun said on Twitter Monday. “China will take countermeasures in response to the US’ provocations to defend its sovereignty &territorial integrity.”

China renewed its large-scale military drills in response to the visit.