59
Shares
Facebook23Twitter14WhatsApp3Telegram1
Linkedin1Pinterest5Tumblr1
NEWYou can now listen to Fox News articles! The number of field invasions in soccer matches in England and Wales last season soared by 127% compared to the last full…

The number of field invasions in soccer matches in England and Wales last season soared by 127% compared to the last full campaign before the coronavirus pandemic, according to government statistics released Thursday.

The data provided by the Home Office — a government department responsible for law and order — highlighted the growth in anti-social behavior at matches, which soccer authorities are attempting to combat.

On Wednesday, the Premier League announced that fans who run onto the field at matches, or use objects like smoke bombs and pyrotechnics, will receive automatic bans from clubs for a minimum of a year.

According to the government statistics, there were 441 matches where field invasions were reported last season — more than double the number in the 2018-19 season.

“Disorder is a problem that has not gone away,” said Mark Roberts, the head of British soccer policing, “and throughout the whole of last season, we saw an increase in crime at football matches across the country — from the Premier League right down to the (fifth-tier) National League.”

Roberts said drug use and alcohol are key factors behind disorderly behavior and noted that the government is adding Class A drug offenses to the banning order legislation. 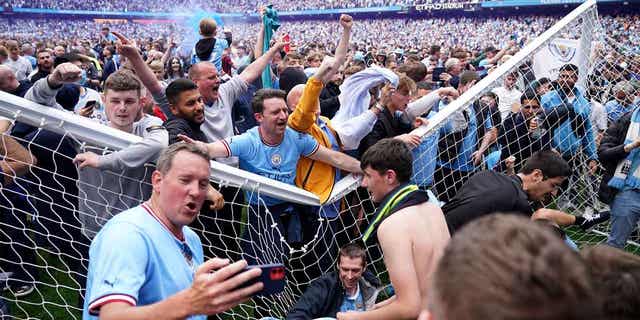 Manchester City fans celebrate after the English Premier League soccer match between Manchester City and Aston Villa in England, on May 22, 2022. The number of field invasions in soccer matches in England and Wales last season increased by 127% compared to the last full campaign before the coronavirus pandemic. (AP Photo/Dave Thompson, File)

The Home Office has moved to ensure the women’s domestic game is covered by the banning orders.

Among the incidents of disorder from last season, Sheffield United captain Billy Sharp was headbutted in the face by a Nottingham Forest fan at the end of a playoff game in the second division, leading to the fan getting a 24-week prison sentence.

Crystal Palace manager Patrick Vieira kicked out at an Everton fan who was taunting him during a field invasion at Goodison Park. A Manchester City fan who ran onto the field and taunted Aston Villa goalkeeper Robin Olsen on the final day of the season at Etihad Stadium got a four-year banning order.

“My family would never go to an away game nowadays because of it, and that’s a shame that I feel too uncomfortable for them to go to away games,” said Dier, who was involved in a confrontation with a supporter following Tottenham’s loss to Norwich in an FA Cup match in March 2020.

Dier climbed into the stands after the fan argued with the defender’s brother. Dier received a four-match ban by the Football Association and was handed a fine.

Liverpool captain Jordan Henderson said his family and friends have been discouraged from going to games because of the kind of crowd chaos seen at the European Championship final at Wembley Stadium last year and the Champions League final outside Paris this year.