French President Emmanuel Macron and Spanish Prime Minister Pedro Sánchez signed a friendship treaty in Barcelona on Thursday to strengthen relations between the European neighbors, as both leaders faced protests on their home fronts.

The one-day summit came amid a day of widespread strikes on the other side of the Pyrenees against Macron’s bid to increase the minimum retirement age from 62 to 64. Sánchez, as host, had to endure a noisy rally by Catalan separatists near the meeting venue.

The Treaty of Barcelona signed by the leaders establishes working groups between their governments in a variety of areas. The leaders and several of their ministers discussed issues including energy, migration and support for Ukraine’s war effort — all in line with finding common cause in steering European Union policy.

“We are not just reinforcing our countries, we are reinforcing Europe,” Sánchez said, calling the treaty “historic.”

Both governments consider this a diplomatic bond of the highest order. Spain only has a similar treaty with Portugal; France has them with Germany and Italy.

“We are going to massively reinforce the bilateral relationship… and make it even more efficient” at the European level, Macron said. “That treaty is also going to strengthen these common views,” especially regarding European sovereignty and strategic autonomy.

The agreement comes with Macron and Sánchez seeking stronger positions inside the EU. Macron is profiling himself as the continent’s leading politician to fill the void of former German Chancellor Angela Merkel, while the equally pro-EU Sánchez wants Spain to have a more influential role in Brussels following Britain’s exit from the bloc.

After years of cordial but sometimes distant relations, France and Spain have grown closer recently. 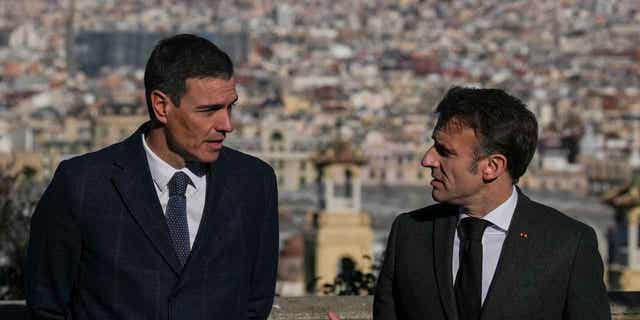 Spain, France and Portugal agreed late last year on a major undersea pipeline to transport hydrogen from the Iberian Peninsula to France and eventually the rest of Europe. The energy pipeline, dubbed H2Med, will run from Barcelona to Marseille.

Macron and Sánchez also both want the European energy market to be reformed to respond to the energy crisis provoked by Russia’s invasion of Ukraine. Spain also hopes France could back its request that the EU extend the permission granted last year for Spain and Portugal to apply special measures to lower energy prices, a plan that could possibly serve as an inspiration for all of Europe.

FRANCE TO PUSH ‘MADE IN EUROPE’ STRATEGY AT EUROPEAN UNION SUMMIT

“Both of our countries have presented our proposals (for energy market reforms), which I deem solid and detailed, and they both point in the same direction,” Sánchez said. “We are going to work together so that the market is reformed in the coming months.”

The meeting was held in Catalonia’s National Art Museum set atop the Montjuic hill that overlooks Barcelona.

Several thousand Catalan separatists rallied along a wide promenade at the foot of the hill to try to energize their flagging movement to carve a new state out of this corner of northeast Spain that borders France.

The sound of distant jeers could be heard from afar as Macron and Sánchez reviewed Spanish soldiers before the national anthems were played on arrival. North of Barcelona, protesters disrupted traffic on a highway. There was a brief scuffle between protestors and police in central Barcelona after the peaceful protest had dispersed. But the moments of tension were a far cry from the widespread and violent clashes seen in years past.

Sánchez has spent quite a bit of political capital in defusing the separatist movement, with pardons for imprisoned leaders of a failed 2017 secession bid and recent legal reforms. While that has succeeded in reducing tensions in Catalonia, there is still a hardcore group that refuses to go away.

Catalonia’s regional chief Pere Aragonès greeted Macron and Sánchez outside the museum but then broke protocol by leaving before the group photo and anthems.

“There has been an attempt (by Sánchez) to use today’s summit to impose a false vision of the reality, to make it look like the political conflict between Catalonia and the Spanish state has been resolved,” Aragonès said. “But nothing is farther from the truth.”

Sánchez said he was grateful that Aragonès turned up and underscored the choice of Barcelona as his choice for the signing of the treaty.