Greek authorities mounted a sea-and-air search for six people reported missing by a group of migrants found Thursday on the southeastern Aegean Sea island of Leros after crossing from the nearby Turkish coast in an inflatable dinghy.

A separate operation was also under way off southwestern Greece after passing merchant ships picked up 85 migrants from a wooden vessel in distress that appeared to have been heading for Italy.

Greece’s coast guard said 49 people were found on a beach on Leros. It said the migrants, who were all in good health, reported there had been 55 people in total on the flimsy vessel when it left Turkey. 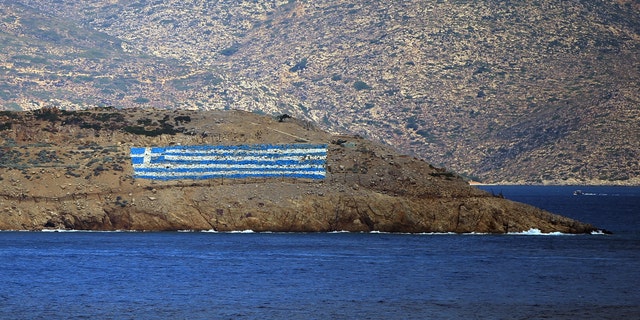 The Greek flag painted on a hill on Pserimos Island.  (Ali Balli/Anadolu Agency via Getty Images.)

Separately, the coast guard said a merchant vessel and a drone were searching in the Mediterranean Sea 65 miles southwest of the Greek port of Pylos after the second incident involving a wooden vessel carrying migrants.

It said the boat was located by a Portuguese-flagged freighter that picked up 82 people, while another three were rescued by a passing Liberian-flagged tanker.

All 85 survivors were taken to an anchorage off the southern port of Kalamata, from where they were being ferried to shore in smaller vessels.

COLORADO DEPUTY KILLED BY ILLEGAL IMMIGRANT IN HIT-AND-RUN, SUSPECT ARRESTED WITH HER HANDCUFFS

Greece is a major destination for people from the Middle East, Africa and Asia who embark in unsafe boats from Turkey hoping to start a better life in Europe.

After Greece boosted sea and air patrols in the Aegean Sea to try to reduce the influx of migrants, smugglers crowded migrants into yachts heading for Italy.