59
Shares
Facebook23Twitter14WhatsApp3Telegram1
Linkedin1Pinterest5Tumblr1
Swedish climate change activist Greta Thunberg is being accused of staging her detention at a German coal mine protest after video surfaced showing the 20-year-old seemingly laughing with officers. During the…

Swedish climate change activist Greta Thunberg is being accused of staging her detention at a German coal mine protest after video surfaced showing the 20-year-old seemingly laughing with officers.

During the purported photo-up, video shows Thunberg smiling and laughing with who appears to be another protester. One officer, clad in riot gear and a helmet, has Thunberg by the arm, while another stands next to her with his hands clasped in front of him. A third officer laughs along with them.

Thunberg falls quiet and serious as a photographer snaps pictures of her and the officers standing still. In the background, a large line of riot officers is seen standing in a line some distance away. Several photographers swarm around Thunberg as two officers then lead her toward a parking lot.

“The fake arrest of #GretaThunberg,” the Twitter account TVisCOOL! wrote, first sharing the clip viewed more than 6.2 million times as of Wednesday morning. “All set up for the cameras.”

“Greta Staged her Arrest for Attention,” Oli London, a YouTuber who gained recognition in conservative circles for sharing his story about de-transitioning, tweeted to his more than 62,000 followers. “She is a puppet of the WEF and George Soros. “They are laughing at the world. Greta you are a terrible actress, at least try to be a bit more convincing when you get arrested next time.”

Thunberg’s critics also included Ian Miles Cheong, who wrote to his more than 450,000 Twitter followers, “Yes, the Greta Thunberg arrest was staged for the establishment media.”

Police in western Germany carried Thunberg and other protesters away Tuesday from the edge of an open coal pit mine where they demonstrated against the ongoing destruction of a village to make way for the mine’s expansion, German news agency DPA reported.

Thunberg was among hundreds of people who resumed anti-mining protests at multiple locations in the western German state of North Rhine-Westphalia a day after the last two climate activists holed up in a tunnel beneath the village of Luetzerath left the site. 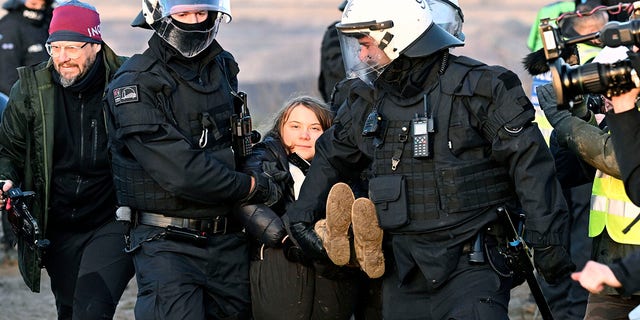 Police officers carry Swedish climate activist Greta Thunberg away from the edge of the Garzweiler II opencast lignite mine during a protest action by climate activists after the clearance of Luetzerath, Germany, Tuesday, Jan. 17, 2023.  (Federico Gambarini/dpa via AP)

The German government reached a deal with energy company RWE last year allowing it to destroy the village in return for ending coal use by 2030, rather than 2038. Both argue that coal is needed to ensure Germany’s energy security that’s squeezed by the cut in the supply of Russian gas due to the war in Ukraine.

But environmentalists say bulldozing Luetzerath will result in vast greenhouse gas emissions. Germany is expected to miss its ambitious climate targets for the second year in a row.

A police spokesman, who spoke on condition of anonymity as is customary in Germany, said he was not permitted to give out any details on Thunberg or any other individuals who participated in the protest due to privacy rules, The Associated Press reported. 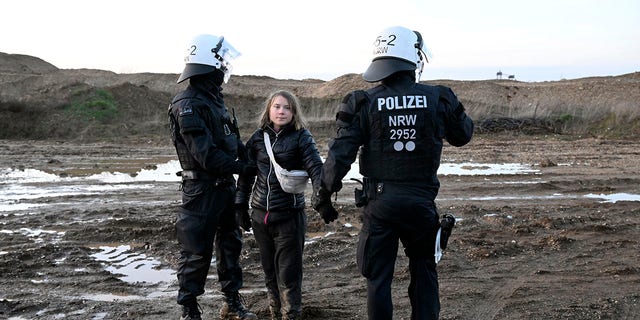 Police officers with Swedish climate activist Greta Thunberg at the edge of the Garzweiler II opencast lignite mine during a protest action by climate activists after the clearance of Luetzerath, Germany, Tuesday, Jan. 17, 2023.  (Federico Gambarini/dpa via AP)

“Here she is laughing and joking with police and crew,” he wrote, sharing the video. “Timely reminder that the Greta Thunberg project is a well-coordinated, well-funded climate change grift.”

British commentator Adam Brooks, who has more than 272,000 Twitter followers, wrote, “That’s not an arrest, that’s a PR opportunity to get headlines around the world…

‘[P]oor young Greta being frogmarched by big horrible police’ until you watch this video.”

“How staged, never believe all you see in the MSM,” he added. 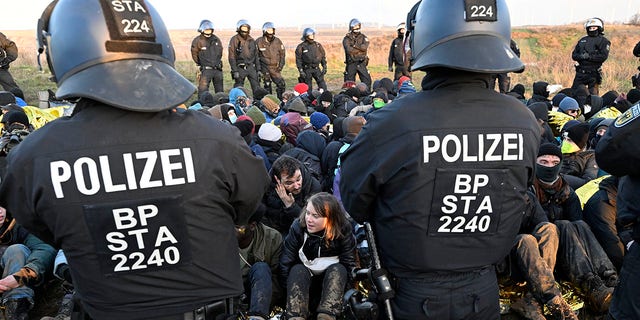 Police officers stand in front of a group of protesters, including Swedish climate activist Greta Thunberg, center bottom, on the edge of the Garzweiler II opencast lignite mine during a protest action by climate activists after the clearance of Luetzerath, Germany, Tuesday, Jan. 17, 2023.  (Roberto Pfeil/dpa via AP)

“Guess who was caught at the protest against the coal mines? Of course, @GretaThunberg! Does this look staged to you?” French journalist Alexandra Lavoie, with Rebel News, tweeted.

Amid the heated coal debate in Germany, the European Union pushed forward on Tuesday with a major cleantech industrial project designed to boost its plans for a greener future as the 27-nation bloc pursues the goal of being climate neutral by 2050.

Elsewhere in western Germany, dozens of climate activists glued themselves to a main street in Germany’s western city of Cologne and to a state government building in Duesseldorf. Near Rommerskirchen, a group of about 120 activists also occupied the coal railroad tracks to the Neurath power plant, according to police and RWE.

Those who refused to leave the tracks were carried away, DPA reported. In addition, several people occupied a giant digger at the coal mine of Inden, while hundreds of other protesters joined a march near Luetzerath. The village itself was evacuated by the police in recent days and is sealed off. 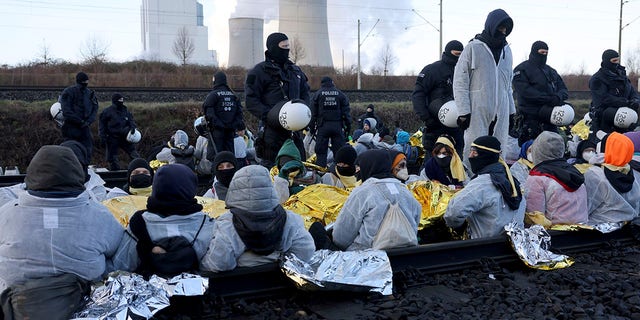 Once again, there were a few clashes with the police. Several activists ran over to the Garzweiler open pit mine, according to DPA. They stood at the brink of the open pit, which has a sharp break-off edge. Police said it was dangerous and people were prohibited from staying there. Police in nearby Aachen said a group of around 50 protesters got dangerously close to the rim of the mine and did not want to leave despite being asked to do so. All the people in that group had to be carried away from the edge of the mine and were then temporarily held to determine their identities, police said. Photos from the scene showed Thunberg was one of those who officers took away.

Thunberg herself tweeted about her alleged detention. “Yesterday I was part of a group that peacefully protested the expansion of a coal mine in Germany. We were kettled by police and then detained but were let go later that evening,” she wrote. “Climate protection is not a crime.”

Police and RWE started evicting protesters from Luetzerath on Jan. 11, removing roadblocks, chopping down treehouses and bulldozing buildings. Activists have cited the symbolic importance of Luetzerath for years, and thousands of people demonstrated Saturday against the razing of the village by RWE for the expansion of the Garzweiler coal mine.

Danielle Wallace is a reporter for Fox News Digital covering politics, crime, police and more. Story tips can be sent to danielle.wallace@fox.com and on Twitter: @danimwallace.