58
Shares
Facebook22Twitter14WhatsApp3Telegram1
Linkedin1Pinterest5Tumblr1
NEWYou can now listen to Fox News articles! Ukraine is facing a worsening health emergency as the conflict with Russia rages on, the World Health Organization said, with a combination…

Ukraine is facing a worsening health emergency as the conflict with Russia rages on, the World Health Organization said, with a combination of burnt-out staff, increased shelling and the approach of winter fueling the agency’s concerns.

There have been 434 attacks on healthcare facilities in the country, out of 615 such attacks reported this year worldwide, according to a WHO tracker.

The WHO’s Ukraine emergency coordinator Heather Papowitz said healthcare teams in many areas have become used to working with shelling outside their window.

“It’s kind of falling off the news in a way… but this is an emergency of public health,” Papowitz told Reuters on Wednesday.

UKRAINE WAR HAS TAUGHT US THAT WE ARE ALL REFUGEES NOW

Russia denies it targets civilians, but many Ukrainian towns and cities have been destroyed and thousands killed. Ukraine and its Western allies accuse Russian forces of war crimes. 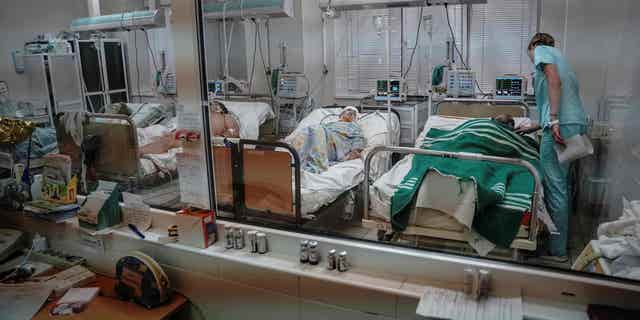 Ukrainians injured in a missile strike on a shopping mall being treated in a hospital, as Russia’s attack on Ukraine continues, in Kremenchuk, in Poltava region, Ukraine on June 27, 2022. (REUTERS/Anna Voitenko)

Papowitz, who visited Ukraine last week, said the WHO was most concerned about areas inaccessible to its teams due to fighting or Russian occupation, including the eastern Donbas region and Kherson to the south.

“Getting access is the biggest issue, it is what keeps us up at night,” said Papowitz, citing challenges in getting medicines into these areas for people with chronic conditions or treating physical and mental trauma.

Disease control is also a factor. Ukraine has low vaccination coverage for measles and a polio outbreak, and there have been concerns over the risk of cholera. No cholera outbreaks have yet been verified, said Papowitz.

WHO is also working alongside national health systems to support the health of refugees in neighboring countries. More than six million people have fled the fighting in Ukraine, and a similar number are displaced within the country, too.

Papowitz said there were barriers in everything from language to affordability for refugees accessing healthcare, which the WHO is working with national governments to address.