58
Shares
Facebook22Twitter14WhatsApp3Telegram1
Linkedin1Pinterest5Tumblr1
Protests in Peru get violent At least one person died Wednesday in the Peruvian city of Puno after new scuffles between anti-government protesters and police. Protests continued into Thursday. (Courtesy…

Protests in Peru get violent

At least one person died Wednesday in the Peruvian city of Puno after new scuffles between anti-government protesters and police. Protests continued into Thursday. (Courtesy Info Andes/Peruvian Prosecutor’s Office handout via Reuters)

Protests in the streets of Peru have continued to grow as protesters continue to demand President Dina Boluarte’s resignation and for her predecessor Pedro Castillo to return to office.

“We have delinquent ministers, presidents that murder, and we live like animals in the middle of so much wealth that they steal from us every day,” Samuel Acero, a farmer who heads up a regional committee of protests for the southeastern city Cusco, said as he walked in downtown Lima Thursday morning.

“We want Dina Boluarte to leave. She lied to us.”

Video shows police shooting canisters of tear gas into crowds of demonstrators, who kick or throw the cans back at the officers. Fires in apartments and vehicles light up the streets, with footage showing burned-out cars and burning tires. 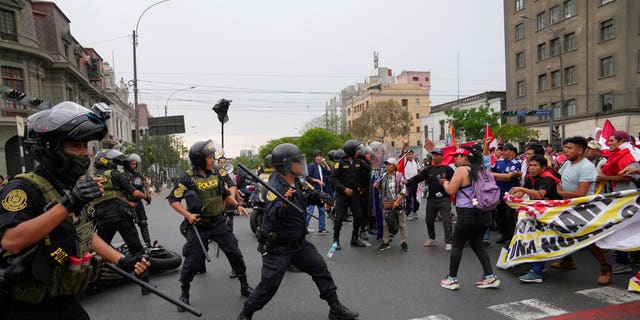 Anti-government protesters who traveled to the capital from across the country to march against Peruvian President Dina Boluarte clash with the police in Lima, Peru, Wednesday, Jan. 18, 2023. Protesters are seeking immediate elections, Boluarte’s resignation, the release of ousted President Pedro Castillo and justice for the dozens of protesters killed in clashes with police.  (AP Photo/Martin Mejia)

Castillo dissolved the country’s Congress in December and called for new elections ahead of a renewed attempt to remove him from office. He established a new emergency government and said he would make changes to leadership in the judiciary, police and constitutional court.

The move to oust Castillo concerned corruption allegations, with six investigations opened against him. Castillo’s actions, seen as an effort to preserve power, prompted the Congress to fully oust him and replace him with Boluarte, his former vice president.

The appointment proved incredibly unpopular, with some voters seeing Castillo as “one of us,” while Boluarte remains distant and unknown to them.

The protests have claimed 53 lives so far and remained focused in Peru’s Andes region but have continued to spread partially due to the clashes with security forces. 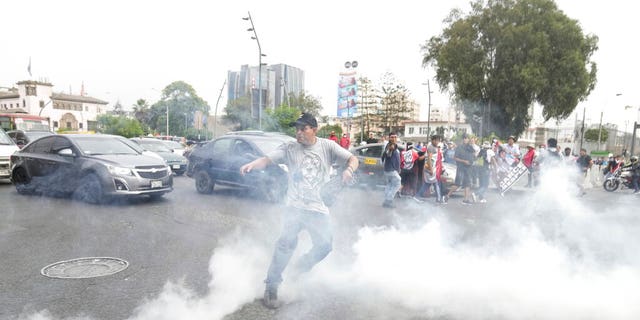 An anti-government protester throws a tear gas canister at the police during a march by demonstrators who traveled to the capital from across the country to protest against Peruvian President Dina Boluarte in Lima, Peru, Wednesday, Jan. 18, 2023. (AP Photo/Martin Mejia)

On Thursday afternoon at Alfredo Rodriguez Ballon International Airport in Arequipa, hundreds of protesters gathered to call for the resignation of Boluarte. An estimated 40 protesters breached the airport’s perimeter, scaling a high metal fence, prompting a dramatic confrontation with police, who attempted to disperse the protesters with tear gas.

Protesters reportedly burned a hut and destroyed lighting equipment on the runway. The deposed Castillo remains a popular figure in the poor and rural south and highlands, where he received widespread support in the last presidential election.

Protesters even retaliated by attacking and burning a police officer to death last week. José Luis Soncco Quispe, 29, was on patrol with a fellow officer in Juliaca, a city near the border with Bolivia and Lake Titicaca, Monday night when they were attacked by a mob that later set fire to their vehicle, according to police reports.

“We’re at a breaking point between dictatorship and democracy,” said Pedro Mamani, a student at the National University of San Marcos. Students there are housing demonstrators who traveled to Peru’s capital for the protest that is being popularly referred to as the “takeover of Lima.” 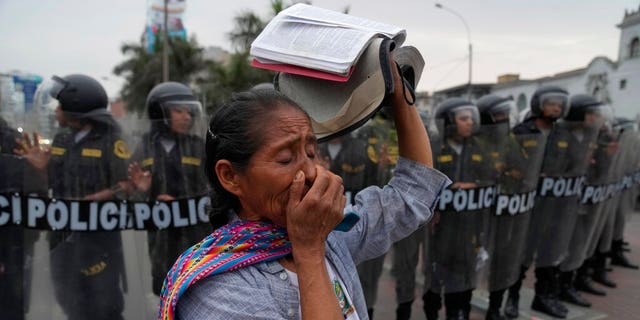 A woman carries a Bible in front of a line of riot police during a march by anti-government protesters who traveled to the capital from across the country to protest against Peruvian President Dina Boluarte in Lima, Peru, Wednesday, Jan. 18, 2023. (AP Photo/Martin Mejia)

By bringing the protest to Lima, demonstrators hope to give fresh weight to the movement. The concentration of protesters in Lima also reflects how the capital has started to see more anti-government demonstrations in recent days.

A total of 11,800 police officers will be deployed throughout Lima, Victor Zanabria, the head of the police force there, told local media. He played down the size of the protests, saying he expected around 2,000 people to participate.

Fox News’ David Unsworth and The Associated Press contributed to this report.