Sing about war and cluck like a chicken: tips from the pros on how to win Eurovision 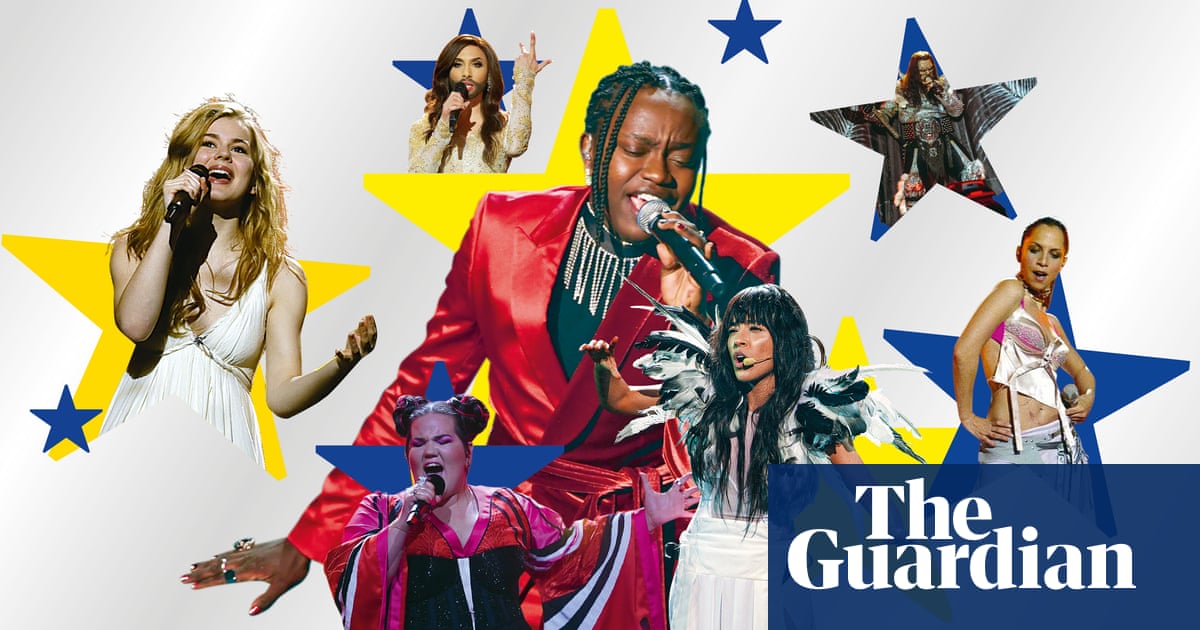 To some, it’s a cultural cringefest. To others, it’s the World Cup of music. But no matter your spin, the Eurovision Song Contest remains one of the world’s most-watched television programmes, with the last edition, in 2019, attracting more than 180 million viewers. Founded in 1956, it has inspired and outlasted countless reality singing franchises owing to its mix of big voices, over-the-top staging and a fervent nationalism, as artists sing for themselves and their countries. Winning songs can be brash or beautiful; they just need to cultivate votes across the public and a professional jury across Europe (and Australia). Past winners include a bearded drag queen from Austria, a Finnish metal band wearing latex monster masks, and Céline Dion, who, despite having no connection to Switzerland, was scouted to sing for them before she was a global megastar.

The pandemic put the kibosh on the show last year, but producers in Rotterdam have organised a Covid-safe edition with reduced audience numbers and strict rules that require all artists to stay in their hotels when not rehearsing or competing. Some countries chose to retain their singers from 2020, but everyone had to submit a new song. In the United Kingdom, the BBC, which runs the UK selection committee, invited back James Newman, who has written hits for the likes of Rudimental and Calvin Harris. His song Embers is a bouncy slice of feelgood pop but, among the bookies, Newman is – at the time of writing – considered one of the outsiders to win this year.

Others have chosen to stage new domestic competitions to find their acts. Elena Tsagrinou, the singer representing Cyprus, is among the new recruits with the song El Diablo – about falling in love with a man as bad as the devil. Apparently she’s hungry: “Hotter than Sriracha on our bodies / Ta-taco tamale, yeah, that’s my mood”.

We know what she’s eating, but what’s in the secret sauce of a winner? “It’s easy to write nice songs, but nice songs don’t win Eurovision,” says Thomas Stengaard, who co-wrote El Diablo as well as Denmark’s winning entry Only Teardrops in 2013. “A winner has to have something special and there are no rules for that. You need luck and the right song at the right moment.”

Lightning in a bottle aside, here are five actual attributes a great Eurovision performance needs, from some of the show’s most influential insiders.

The rise of TikTok and Instagram has left viewers with even shorter attention spans. In 2018, the Israeli songwriter Doron Medalie catered to that with his winning song Toy, a banger focused on female empowerment with a distinct Middle Eastern sound. “Instagram Stories took over the world, so we changed the story of the song every 15 seconds,” Medalie says. “A winning song needs all kinds of turning points.”

So, in the opening bars of Toy, the singer Netta Barzilai deployed a series of bizarre noises – tongue rolls, a high-pitched “la”, something akin to a sneeze, and a loud “ouch” as if someone had just stepped on her big toe – before launching into chicken clucks, which she used to shade men intimidated by powerful women. “We don’t call it a song, we call it an event,” Medalie says. “It’s not Toy. It’s Toy Story.”

Other winners – particularly those with an ethno-national identity – have thrown similar curveballs. In 2003, Sertab Erener delivered Turkey its first and only win with Everyway That I Can. The song opened with an in-your-face instrumental that included Turkish tambourine and strings, before moving through sections of belly-dance pop and even spoken-word rap.

A year later, Ukraine had its first victory with Ruslana’s Wild Dances, a song inspired by her family’s connection to the Carpathian mountains. Within the first 30 seconds Ruslana, wearing a loin cloth and what appeared to be several dead animals, moved from the trumpet sounds of the trembita (similar to an alpine horn) to pounding drumming to modern dance beats. It was only then – after leaving the hunting lodge for the club – that she started to sing: “Just maybe / I’m crazy”.

At the end of 2011, the choreographer and stage director Ambra Succi spent more than two months working with Swedish singer Loreen on staging her eventual winning entry Euphoria, a synth-heavy ode to an enduring romance. Inspired partly by the mystery and lighting of performances in the film Memoirs of a Geisha, Succi sought to abstract Loreen from reality and to create the illusion that she wasn’t performing in front of tens of thousands of flag-waving spectators. “Eurovision is a commercial platform, so you’re used to a specific type of visual and song,” she says of the massive arenas. “We really didn’t want to show the audience with balloons. I wanted to enter a fantasy.”

Succi put Loreen on a rectangular podium on stage, narrowing the space in which she could move and isolating her further from the audience, which producers cropped out of shots and shrouded in darkness.

It went on to earn the highest number of douze points in the contest’s history and topped the charts in nearly 20 countries.

The Netherlands – winners of the last Eurovision – played a similar trick. Singer Duncan Laurence sat alone at a piano crooning Arcade – a sad-boy ballad in which he opines, “I’ve spent all the love I’ve saved / We were always a losing game”. With the audience in the dark (literally), Duncan could have an emotional reckoning with himself.

Voters can’t escape news headlines. Songs that tap into broader events stand a good chance of resonating with viewers, and in recent years providing a musical rebuke to Russia has done the trick. Ukraine won Eurovision 2016 with Jamala’s 1944, about the forced deportation of Crimean Tatars – including her great-grandmother – under Stalin. But the nihilistic lyrics (“When strangers are coming / They come to your house / They kill you all / And say / We’re not guilty”) had contemporary relevance, given Ukraine’s ongoing war with Russia over its annexation of Crimea two years earlier. At the climax of the song, Jamala cried out for her family and tens of thousands of other victims of Stalin’s cultural genocide. A yellow and blue tree – the colours of Ukraine’s flag – sprouted up on the screen, suggesting a resurgent Ukraine.

Jamala still maintains that her song was personal and not political. “At the time when my great-grandmother was deported, she had a daughter in her arms, who died on the way,” she says. “The only thing that helped me win Eurovision was that my story is true. I didn’t have to act on stage, to pretend.”

Two years earlier, Austria’s Conchita Wurst – the first and so far only bearded drag queen to compete at Eurovision – snatched the crown with Rise Like a Phoenix, a Bond-esque ballad of perseverance. She seemed to embody the western response to draconian anti-LGBT legislation introduced by Putin a year earlier, and when conservative politicians in Russia called on her to be removed from the contest, it only strengthened her campaign.

“Conchita was the singer in that year’s show that got the most people talking,” says the song’s lyricist, Charlie Mason.

The political climate can also offer up excuses for poor performances. In the aftermath of Brexit, British red-tops have frequently run headlines suggesting the UK will never win again since turning its back on the continent. But revellers at Eurovision parties don’t typically assess hard borders and fishing rights disputes while casting their votes. Ultimately, a special song can cut through the noise.

Think of the kids

Sweden’s last Eurovision winner in 2015 was as easy on the eyes as he was on the ears. Måns Zelmerlöw – strong jaw, big biceps, obvious fitness regime – took to the stage wearing tight leather trousers and a top that seemed to be painted on. But according to Linnea Deb, one of the songwriters behind his winning song Heroes, he had another, less obvious asset: his stage show tapped into our collective nostalgia for childhood.

The song, which moves from a raw country opening to a full-on dance-pop chorus, casts small acts of kindness as heroic gestures. The stage show, meanwhile, came with a strong anti-bullying message. In the opening bars, Zelmerlöw sat against a black screen on to which producers projected an adorable stick figure in overalls and a beanie hat: head down, shoulders hunched, forlorn, until a balloon lifts him to the sky. By the end of the song said stick man was standing tall and giving a fist pump. “Everyone could relate to that little guy,” Deb says. “It was like: ‘That is my best friend.’ ‘That is me when I was a kid’, or, ‘That was my friend when I was a child.’”

Ireland may have the most Eurovision wins with seven, but its heyday passed in the 90s. Those victories came at a time when countries were forced to sing in their national language, giving English-speaking Ireland a massive advantage. Sweden – among the world’s biggest exporters of pop music per capita – now reigns: it has had 11 top five results since 2001, more than any other country this century.

Much of that comes down to Melodifestivalen – literally Song Festival – a six-week primetime Eurovision selection show that brims with the passion, competitiveness and media hype of the Premier League. Some 28 acts compete in four semi-finals and a Second Chance relegation round for a ticket to the final. Its music scouts maintain close relationships with record labels as they search for and court new and established talent. “Spotify gets tens of thousands of new titles every day,” says Christer Björkman, the show’s executive producer and an architect of its resurgence over the past two decades. “To be seen and heard in that chaos of new music is so difficult. But we can reach the entire country in one evening.”

At one point in March, eight of the top 10 songs on the Swedish radio charts were from the competition, including Voices, sung by Tusse, a former refugee from the Democratic Republic of Congo who is now making a life and career in Sweden. He is representing the country in Rotterdam with lyrics that speak to his own experience: “Can’t stop us now, forget the haters / Get up and live and make it matter”.

Record labels in Sweden leverage the power of Eurovision to help their artists flex. But in the UK, where the contest has a more chequered reputation, songwriters and artists view entering as too much of a risk: British acts have finished in the bottom five in four of the past five years.

So what did the UK’s last winner have that its recent entries lack? “When I won with [Love Shine a Light] in 1997, I already had 20 years’ experience of standing on stage, owning it,” says Katrina Leskanich of Katrina and the Waves. “I truly believed in the song and the message. Confidence, energy and joy is a winning combination, and it worked for me on the night.”

The BBC recently renewed its collaboration with the record label BMG to pick artists and songwriters. Perhaps with a bit more ambition – and the promise of sales – love will shine its light on the UK once more.

China’s Mars rover drives across planet a week after landing

Paris Lees: ‘It drives me crazy when people introduce me as a trans activist’