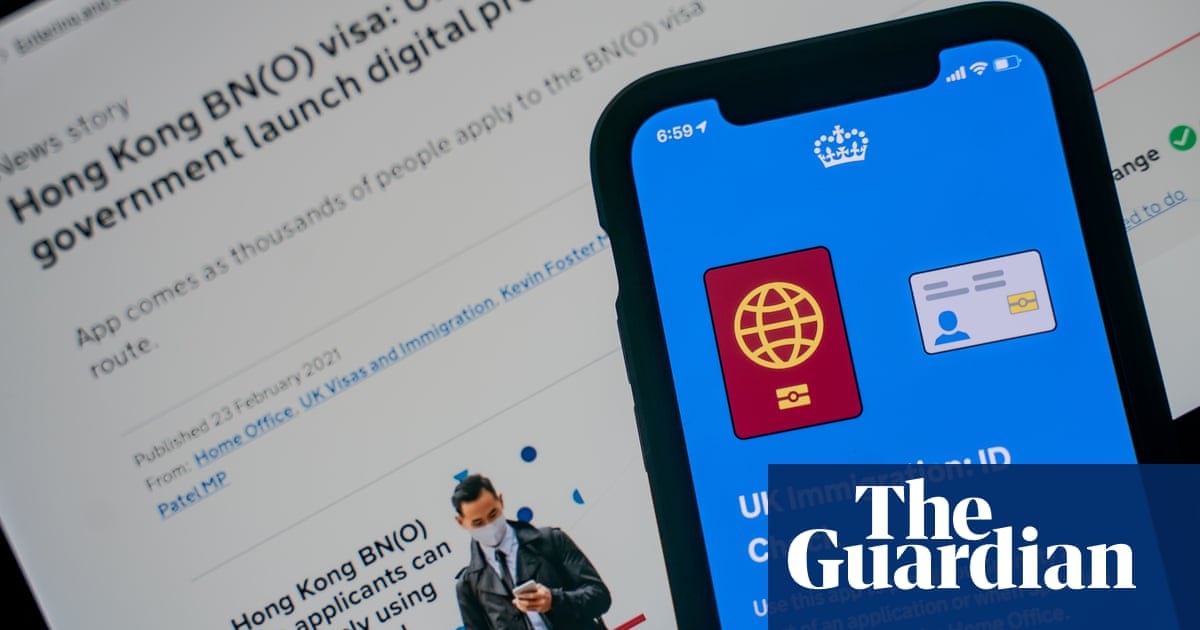 There have been 34,000 applications for a new visa for people from Hong Kong seeking residency in the UK in just two months, the Home Office has revealed.

This compares with applications for visas of any type by just 5,354 EU citizens in the first three months of the year, including as short-term visitors. There were also 26,903 applications for asylum relating to 32,411 people in the UK in the whole of the year ending March.

The new route allows holders of British national (overseas) status and their immediate families to apply for BNO entry visas for either two periods of 30 months or a single period of five years. After five years they can apply to settle in the UK, and for citizenship after a further 12 months.

The route was launched in response to a harsh new national security law imposed on Hong Kong by the Chinese government.

Figures published on Thursday revealed there were 34,300 applications for the BNO route in the first three months of 2021, although it was opened to applications on 31 January. So far, 7,200 of the applications have been granted.

An economic impact assessment by the Home Office published last year gave a “high” range estimate of 500,000 people with BNO status and their dependants arriving in the UK in the first year, with more than 1 million over five years.

Madeleine Sumption, director of the Migration Observatory at the University of Oxford, said: “There’s no reliable way to predict how many people from Hong Kong will move to the UK in the long term. The levels we are seeing in these data can’t be expected to be representative of future flows – they may be suppressed by the pandemic, or may represent a larger than normal first wave because of pent-up demand.”

The migration figures published on Thursday also revealed that just 353 refugees were resettled in the UK in the year to March through government programmes. It’s the lowest number of refugees who have been relocated to the UK in a 12-month period under government resettlement programmes for at least 11 years, and compares to 4,968 for the 12 months to March 2020, and 5,796 in 2018-19.

While resettlement programmes were suspended in March 2020, organisations including Refugee Action and Refugee Council have been critical of the government’s delay in getting them restarted, with other countries being much quicker.

The restart of refugee resettlement was announced in the House of Lords in November, but just eight people were welcomed to the UK between then and the end of 2020.

Resettlement programmes are schemes run by the government that work with the UNand the International Organisation for Migration to identify refugees overseas, such as in countries neighbouring war zones, and relocate them to the UK with refugee status already granted.

Refugee Council and Refugee Action say they have concerns about the government’s commitment to resettle a fair number of refugees, despite the home secretary, Priti Patel, promising at a speech on Monday an expansion of safe routes for refugees to reach the UK.

Tim Naor Hilton, chief executive at Refugee Action, said: “Despite the home secretary’s pledge to expand safe routes for people, for the first time in years, there is no commitment to welcome a single refugee under resettlement programmes.

“Resettlement does not run on hot air. It is doomed unless the government can commit to an ambitious target that shows the world it is prepared to do its fair share to help refugees.”