58
Shares
Facebook22Twitter14WhatsApp3Telegram1
Linkedin1Pinterest5Tumblr1
The dollar slid on Thursday against major currencies in choppy trading as a slew of data continued to show that the U.S. economy was slowing down in the wake of…

The dollar slid on Thursday against major currencies in choppy trading as a slew of data continued to show that the U.S. economy was slowing down in the wake of multiple hefty rate hikes from the Federal Reserve, with the market anticipating a pause in tightening this year.

The yen, on the other hand, rallied against the dollar as traders continued to bet the Bank of Japan (BOJ) will eventually shift away from ultra-loose monetary policy.

US DOLLAR MAY NO LONGER BE GLOBAL RESERVE CURRENCY: GORDON CHANG

Manufacturing activity in the Mid-Atlantic region softened again in January. The Philadelphia Fed’s monthly manufacturing index rose to negative 8.9 this month from negative 13.7 in December, a larger improvement than economists in a Reuters poll had expected. The median estimate was for negative 11.

Conditions overall were labeled as the least negative in three months in a survey of goods producers that also showed inflation pressures – measured by the prices paid index – dropping to 24.5 in January from 36.3 last month. That was the lowest in nearly two-and-a-half years.

However, initial claims for state unemployment benefits dropped 15,000 to a seasonally-adjusted 190,000 for the week ended Jan. 14. Economists polled by Reuters had forecast 214,000 claims for the latest week.

“The housing market is in recession and you’re going to get these regional Fed surveys that are weak and are going to show that business activity is struggling,” he said.

“But the initial jobless claims report reinforces that this labor market remains strong. The labor market needs to break for inflation to continue go down,” he added. 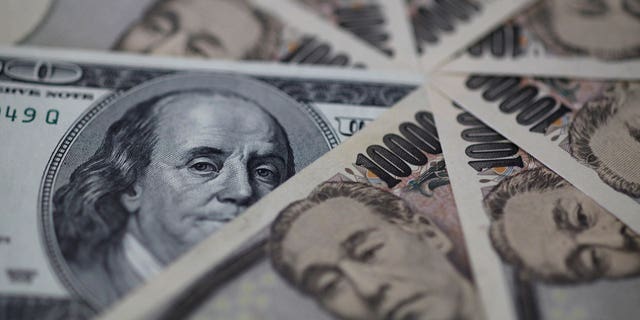 The American dollar depreciated in value Thursday, while the Japanese yen made notable gains. (REUTERS/Shohei Miyano)

In late morning trading, the dollar fell 0.4% against the yen to 128.475 yen, a day after the BOJ’s decision to stand pat on its ultra-loose monetary policy.

The rebound in the yen is also “reflecting the fact that market participants are still speculating (on) a shift in the Bank of Japan’s policy,” Carol Kong, a currency strategist at Commonwealth Bank of Australia, said of the yen’s rise on Thursday.

European Central Bank President Christine Lagarde on Thursday said inflation is far too high and that the ECB will keep raising interest rates.

“We shall stay the course until such a time when we have moved into restrictive territory for long enough so that we can return inflation to 2% in a timely manner,” she said in a panel discussion during the World Economic Forum in Davos, Switzerland.

The dollar index, which measures the U.S. currency against a basket of peers, was last flat to slightly lower at 102.28.

The Australian dollar slumped 0.6% to US$0.69, further pressured by a surprise dip in Australian employment in December.

New Zealand Prime Minister Jacinda Ardern on Thursday made a shock announcement that she would step down no later than early February and not seek re-election.