U.S. Treasury Secretary Janet Yellen used a tour of a wildlife park in South Africa on Wednesday to announce a joint initiative to combat wildlife trafficking and related criminal activities in both countries.

Yellen said during a visit to the Dinokeng Game Reserve that the United States and South Africa would form a task force to focus on the financing of wildlife trafficking. She said there also would be increased information sharing between U.S. and South African financial intelligence units.

The task force would “follow the money” in the same way other investigating authorities pursue evidence of serious crimes, Yellen said, and the “shared commitment” would likely help U.S. efforts to fight money-laundering and high-level corruption.

“Wildlife traffickers, corrupt officials and other criminals rely on many of the same vulnerabilities in anti-money laundering regulatory regimes, so our efforts to combat wildlife trafficking reinforce our efforts to fight corruption and vice versa,” Yellen said at the game reserve located north of Pretoria, South Africa’s capital.

Yellen is on a 10-day tour of Africa, part of a push by the Biden administration to engage more with the world’s second-largest continent. She has already visited Senegal and Zambia, where she outlined the potential Africa, with its young population and growing middle class, has for U.S. business.

She began her visit to South Africa on Wednesday, two days after Russian Foreign Minister Sergey Lavrov held talks with his South African counterpart in Pretoria, underscoring the complicated relations some African nations hold with the West on one side, and Russia and China on the other. 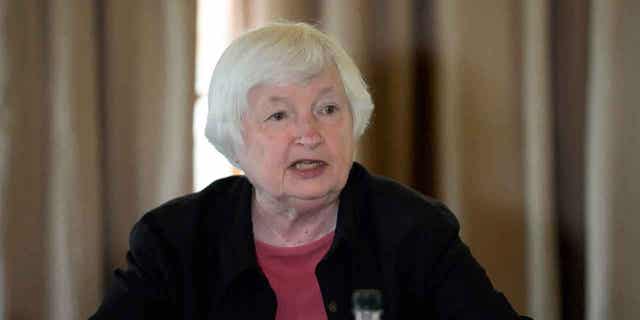 Yellen is due to meet President Cyril Ramaphosa and the country’s finance minister on Thursday, and will also make a trip to a Ford assembly plant and a coal mining region. Yellen is expected to speak about expanding U.S.-African trade and investment flows during her visit to South Africa.

YELLEN WARNS THAT US WILL HIT DEBT LIMIT NEXT WEEK

South Africa is the continent’s most developed economy and viewed as key to the Biden administration’s efforts to enhance the American diplomatic and economic presence in Africa. But the country is also a historical ally of Russia because of the Soviet Union’s support in ending the apartheid system of racial oppression of South Africa’s Black majority.

South Africa is the most significant of several African nations to take a neutral stance on the war in Ukraine and refuse to side with the U.S. and its allies in condemning Russia, a move that perhaps reinforced the need for the Biden administration to re-establish relations in Africa.

President Joe Biden has said he plans to visit Africa this year, as does Vice President Kamala Harris, first lady Jill Biden and other Cabinet secretaries. The U.S. ambassador to the United Nations, Linda Thomas-Greenfield, was also set to start a three-country tour of Africa on Wednesday.

Yellen’s announcement of a joint wildlife trafficking task force at a reserve that is home to lions, leopards, elephants and critically endangered black rhinos could help a key South African industry. South Africa has an abundance of game parks and a thriving wildlife tourism industry but struggles with the effects of poaching and illegal animal trafficking.

The White House strategy for Africa also outlines concern over China’s involvement in sub-Saharan Africa, where it has for years entrenched itself in the region’s natural resources market. China is now South Africa’s biggest trade partner.